The concert featured here comes from the band’s third date on their UK tour, the concert was recorded both on audio and video, both are better than average. The audience recording is excellent, just slightly distant but perfectly balanced with no audience interference by the taper, this recording sounds best when played loud and is a joy to listen to. There has been just one release featuring this material in an incomplete form, The Punishers (NC 01) features songs from this show and from Glasgow two days prior. The set list features a great balance between the 70’s and 80’s output plus a few new songs to boot. I Stole Your Love is a great opener and the band is playing with guts. Eric Singer is a standout, he brought in a harder edge to the band similar to Eric Carr but perhaps a bit harder hitting. Deuce follows hot on its heels, Bruce Kulick plays a great solo, while he is not Ace he leaves his own stamp on the song making for a very strong opening salvo of songs. Heaven’s On Fire keeps the momentum going for the band to go deep for a block of 70’s klassics starting with a very tight (almost too tight) version of Parasite. Paul gives a bit of the tour background prior to introducing Strutter, glad to hear this song back in the set and the band play a very strong version that leads directly into Calling Dr. Love. Bruce plays a great solo on the latter, far from emulating the Space Man his playing sounds confident and assured.

Paul gives an introduction about people wanting the next song back in the set and we are treated to a heavy version of I Was Made For Loving You, his vocals are passionate and the band dove into a rhythmic groove that makes this song really work. The first new song is Unholy, the intro is mega heavy and sounds like the Thunder God stirring deep in the depths, it reeks of evil in the best possible way, musically, vocals, and Bruce’s wild solo makes for an incredible version. Gene gets the lead into 100,000 Years, damn I love this song, the drums are very important to it and Eric does an excellent job and while there is no one who could play this song like Peter, Singer definitely puts his stamp on it. Heck we even get and old school call and response from Paul. There is a source change at the songs end at 5:27 to :41 of Take It Off that sounds like a video source was used to fill the tape flip gap, the edit is seamless and the sound is not much different, perhaps a bit flat sounding. Paul’s intro to the song is what we would expect. A no solo version of God Of Thunder follows, I prefer these versions and it should have followed 100,000 Years as that would have been perfect to have the three heaviest songs in a row. 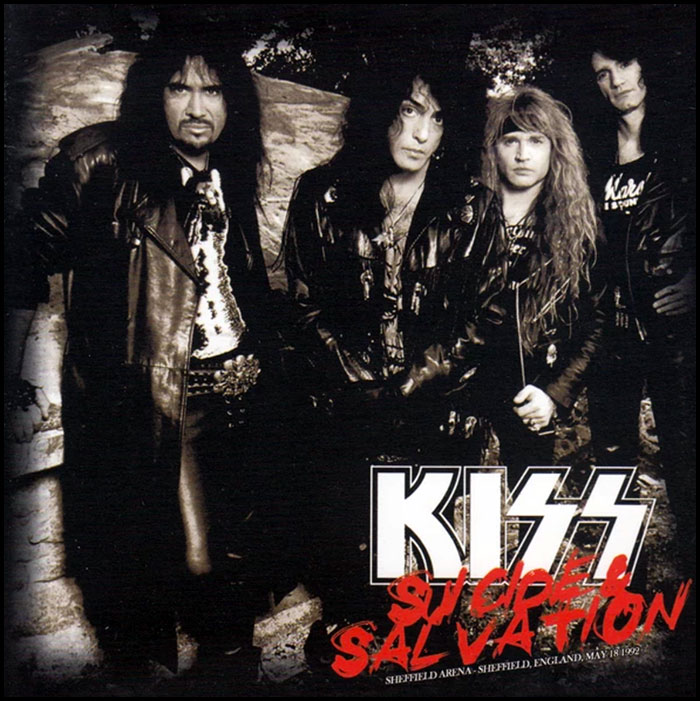 The stripped down nature of the music really gives the spotlight to the music, the hits just keep coming with a very strong rendition of Tears Are Falling and I Love It Loud. Even Love Gun has a to-the-point intro and not your typical Paul going to the doctor and through airport security. Cowbell reigns supreme for an excellent version of Cold Gin and Detroit Rock City ends the show proper with a bit of pyro thrown in for good measure.

A quick tape pause leads us to the encores, Paul introduces Eric Singer to the audience and he gets a nice ovation that is quickly silenced by Paul’s introduction to I Want You, Paul invites the audience to sing along so he starts with “In the morning I raise my head”…they do the rest. The Paul and Eric portion of the song does get a bit tedious and the audience seems a bit tired, we do get a nice mini solo from Singer. The band do a bit snippet of The Who’s Pinball Wizard that leads into God Gave Rock And Roll To You II and the obligatory Rock And Roll All Nite ends a most enjoyable concert proper.

250 copies only of the RED vinyl version