KISS didn’t tour or perform in 1989 or support the “Smashes, Thrashes & Hits” compilation outside of a few radio show appearances. Instead, Paul Stanley embarked on his first solo tour breaking away from the safety of the KISS cocoon. Paul, promoting the tour commented, “I always said I want to get close to the fans, and you can’t get much closer than the clubs… It’s like when your wife lets you go on vacation by yourself and hopes you behave well” (Poughkeepsie Journal, 2/3/89). As a way to reinvigorate his performance, Paul felt, “I’m safe within the confines of the band, but I think everybody should work as a solo artist” (Boston Globe, 2/18/89). Those PR friendly sentiments were markedly different than the reality: “I was fed up with the situation in KISS and needed to flex my muscles a little on my own — and cut the cord between me and Gene” (“Face the Music”). Paul’s relationship with Gene had reached a low-ebb during the “Crazy Nights” era and the compilation gave both of them breathing space to pursue their own activities — something that Paul felt Gene had been doing, to the detriment of KISS, for years anyway.

According to Paul, the solo tour was essentially based on a friend asking him if he’d be interested in playing the Ritz in New York City, a situation where he “could just go in and take the money and run” (Metal Hammer, 5/89). It got him thinking that he did want to play, but that he didn’t just want to go in to the situation with that attitude and instead wanted to do it right. He’d enjoyed KISS’s outings in 1988 at that club and at the Marquee in London. But Paul was adamant, “I didn’t want to do some kind of gig that’s just showing up at a club and saying to the fans, ‘Be glad I’m here and whatever I play is good enough.’ I don’t buy that kind of stuff. I like quality. Once I started organizing the gig, I decided instead of doing one or two shows, I might as well do 20 or 25. Same amount of time spent” (Metal Hammer, 5/89). It was also an artistic situation where Paul could reconnect with his roots: “You say you can never go back or go home, but I think you can. You know, you don’t have to stay. I think we work hard to get out of the confinement of certain places, but knowing we’re not stuck makes it all the sweeter” (Bridgewater Courier-News, 2/25/89). In addition, he could reconnect with his core audience to get a feel for the future: “It’s important that you keep as much in common with your audience as possible” (Boston Globe, 2/18/89).

According to Paul, “My inclination was to put together a band of people I had never played with — just for the sake of doing something different — even though I planned to play a lot of the same songs” (“Face the Music”). As a result he recruited Gary Corbett, Eric Singer, Dennis St. James, and Bob Kulick. Gary had played keyboards for KISS on tour, and during the “Crazy Nights” tour had been laid-off and rehired depending on the audience sizes. Paul wanted Bob Kulick on guitar, and Bob was looking for a change at the time and left Meat Loaf’s backing band. Dennis St. James came in on bass though his connection with Bob — he’d been a member of Balance using his original surname, Feldman. And through Dennis, drummer Eric Singer entered the picture. Eric recalled, “I was in New York, recording an album with Badlands. They had the same management as the guy who played bass on Paul’s solo tour, Dennis St. James… Dennis mentioned to the management that Paul Stanley was planning a solo tour and was in need of a drummer. Since by then I had already finished recording my Badlands tracks, they sent me over to the KISS management office, which was literally around the corner from my hotel. There I met with Paul and gave him some of the CDs I’d played on. He actually ended up hiring me based solely on those credentials” (NY/NJ KISS Expo, 2007). Paul recalled a slightly different scenario, “Eric seemed promising, so I asked him to come to a rehearsal studio and jam with the rest of the band members. It was hard for me to assess him, because with drummers it’s about more than just keeping the beat — they need to play in front of the beat, on it, or behind it in a way that’s sympathetic to everyone else’s playing, in this case mine. But even in that first session, he sounded terrific” (“Face the Music”). Whatever the case, Paul had quickly assembled a power-house backing unit.

There has long been some confusion why Eric Carr wasn’t involved in the band, and Paul’s always been clear that it was his solo tour, and that he wanted to separate from KISS for a while: “Eric Carr, on the other hand, was forlorn about my doing something outside of KISS. He also seemed hurt that he couldn’t be in my solo band even after I had explained to him that the whole point, for me, was to do something different, on my own” (“Face the Music”). Yet the reasons probably also go further with Paul suggesting, “Eric had stopped talking to me during the Crazy Nights tour. He sometimes got into ruts and shut down. He seemed mad at me about something… Things with Eric were definitely getting increasingly weird. But they had always tended to be odd” (“Face the Music”). Adding insult to injury, perhaps, Eric cannot have been happy that Eric Singer was allowed more artistic freedom performing KISS material with Paul during the tour than he was within the KISS framework. David Lee Roth band drummer Gregg Bisonette and Balance drummer Chuck Burgi were also considered for the position, but ultimately ruled out. Bob recalled, “Paul went with Eric Singer because he thought he was flashier and I think he also realized that then he would have my whole band there because I was playing on Skull at the time and so Dennis and Chuck were going to be in the band and he knew what was going on, it wasn’t a secret. I think he didn’t want to be backed up by my band so I think Eric was the better choice” (Metal-Rules.com, 12/15/11). Eric Carr likely didn’t agree. Paul recalled, “When the tour stopped in Manhattan for two gigs at the Ritz, Eric Carr came to one of the shows and sat in the balcony with his head resting on the railing through the entire show. Afterwards he came backstage and, out of left field, turned to Eric Singer and said, ‘You’re going to replace me'” (“Face the Music”).

Once Paul had decided to do the tour he faced a challenge — what to perform? He recalled, “They said, ‘You don’t have to rehearse, just come in and jam, do some old songs.’ I said, ‘That’s the ultimate rip-off.’ You have fans coming, and basically your attitude toward them seems to be, ‘You should be happy I’m here, and whatever I feel like playing is good enough.’ I didn’t want to do that. I said, ‘If I’m going to do this, I’m going to rehearse a band and really do it right.’ Once I started getting into that, I realized that if I’m going to do one club, I should do 20; the amount of work is the same” (Poughkeepsie Journal, 2/26/89). The core of the set would be the songs from the catalog with Paul’s name on them — as he put it, “the vehicle may be different, but the song is the same.” Rather than giving the fans the same-old same-old, he dug into his 1978 solo album for three songs that had never previously been performed live and chose the band’s then current single, “Let’s Put The X In Sex,” which KISS would never perform in electric concert. For good measure, “Hide Your Heart,” an unused leftover planned for inclusion on the next KISS album would be a surprise song for fans while a cover of Led Zeppelin’s “Communication Breakdown” completed things. A couple of songs rehearsed, but not performed included “Nowhere To Run” and “Move On,” the former likely due to it being overly difficult to sing on a nightly basis.

More important, perhaps, than Paul simply getting his kicks was the impact of the response to many of the classic songs he’d revived during the tour’s set — something that would be keenly felt the following year when KISS started to pull more of them back into concerts too. In stretching his musical muscles and proving that he could tour without KISS, Paul made a statement — if only to himself. But he also threw a gauntlet down to Gene in the most obvious of ways; that he was going to move forward with or without him. And taking a play out of Gene’s book he threatened to start expanding his work outside of the band: “Music is the basis for what I do, so if it’s not writing or producing, I don’t want to hear about it. Right now I’m set to produce Cher’s next album, and by mid-May we’ll begin work on the next KISS album” (Toronto Star, 3/3/89). Sadly, one thing missing from the tour was a resulting live release, which Paul had suggested was a possibility: “Hopefully, there’ll be some vinyl coming out of this tour, too” (Toronto Star, 3/3/89). 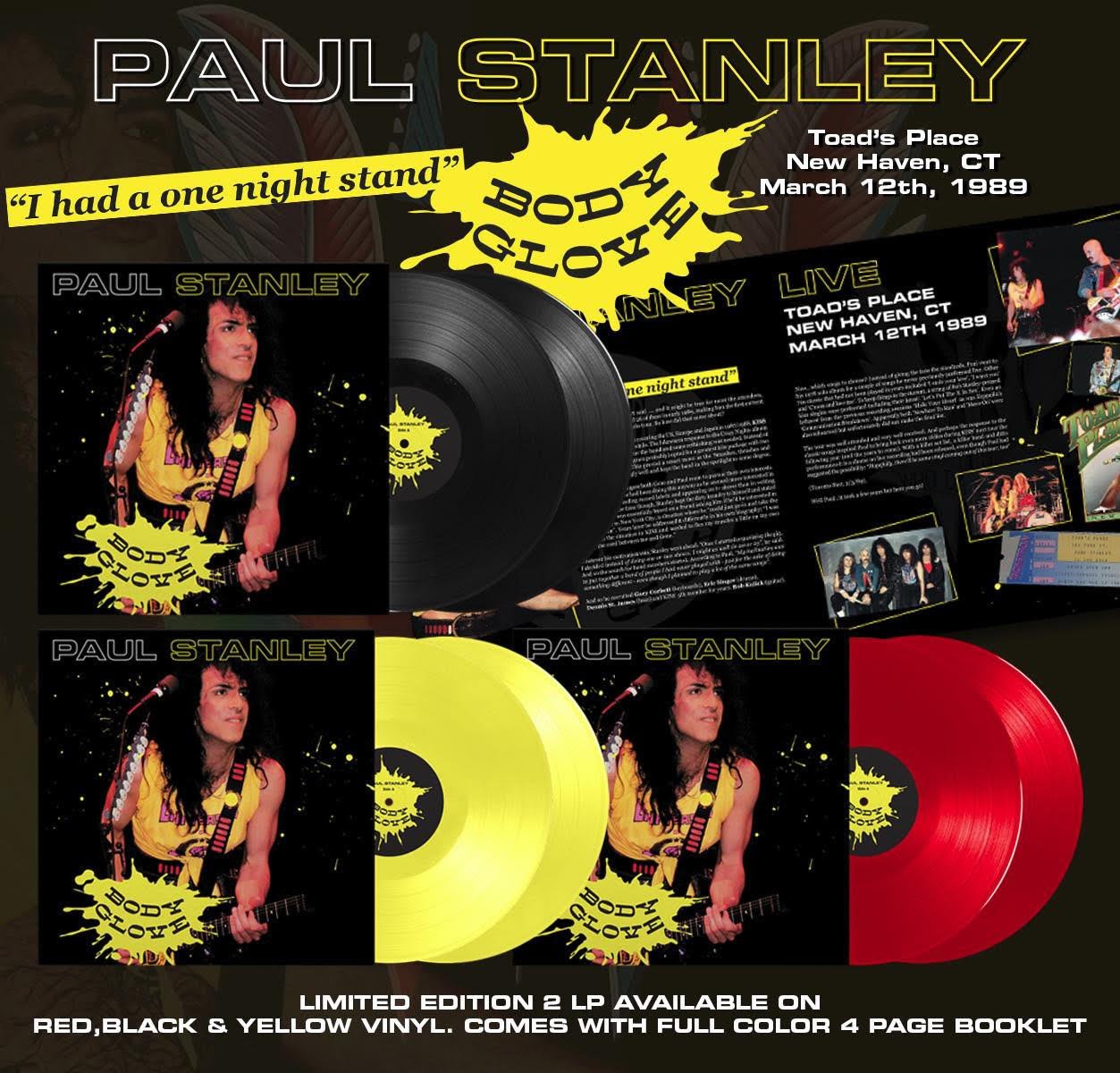