The skies are dark. The atmosphere is thick with dread. The future looks bleak. Only pure, red-blooded heavy fucking metal can save us now. Belching effortlessly classic and crushing anthems from the riffian depths, with all the power and panache of Black Sabbath at their peak, Witchskull return in 2020 to stir our souls once again.

Students of monolithic, turbo-charged and fuzzed-out doom will already be familiar with this Australian trio. Erupting into the consciousness of riff worshippers the globe over with 2015’s monumental, self-released debut The Vast Electric Dark, Witchskull instantly revealed themselves as co-opters of metal’s dark history and purveyors of some of the heaviest, grooviest and fiercest metal available to human ears.

After securing a natural home at Rise Above Records, the band’s follow-up album Coven’s Will (2018) briskly upgraded their worldwide profile, securing countless great reviews and generating a ferocious buzz in the underground. With a reputation for heroically thunderous live shows, and an unerring knack for writing the kind of riffs that cause structural damage to buildings, Witchskull hit the road in support of their sophomore opus, very much with the wind in their sails.

“We’ve been pretty busy touring and writing since the last record was released,” drummer Joel Green says today. “The high point was getting over to New Zealand for the first time to tour with our good mates Beastwars – that was incredible. They’re an excellent band and awesome blokes. We got to play Auckland and a couple of shows in Wellington. Another high for us was making the video for Breathing Blue Light. The only low was probably not getting over to Europe or the US. We tried to make it happen, but things just didn’t pan out this time. But we wanted to make sure we wrote a really solid album, so we focused most of our time on the rehearsal space.”

Every band claims that their new album is bigger, bolder and badder than its predecessors, but Witchskull could hardly say anything else about their third full-length A Driftwood Cross. With a sound that marries the very best imaginable doomy and fuzzy tones with Olympian levels of sonic punch and truly sizzling ensemble performances, the Aussies’ third album sounds colossal and proudly rooted in the old school, but timeless and tenacious, too. From fiery, propulsive rippers like opener Black Cathedrals and the lithe, snappy Baphomet’s Child through to more languorous, lumbering fare like The Red Altar and the warped mysticism of the closing title track, it’s a dazzling blend of the primal and the cerebral: a tour-de-force of atavistic finesse, fit for any age.

“We talked a lot about making a record that had a live energy that was also well crafted,” explains Joel. “We did two separate lots of pre-production recording and spent a lot of time rehearsing and writing. We tried to focus on melody and strong arrangements without losing track of our sound. And it was the same lyrically. Marcus wrote and delivered the lyrics on this record better than ever before, in my opinion. He wanted to have more storylines this time around and, as always, the lyrics need to have deep meaning for him. His lyrics often come from fragments of conversations, thoughts and observations, and through his belief that patterns and waves of sound are intertwined with the environment. Being aware of that allows you to write from within, without interference from the rational conscience.”

Recorded with Jason Fuller (Blood Duster) manning the controls, A Driftwood Cross … has all the energy and rough edges of a spontaneous, DIY recording, but with tons of sonic heft and substance to back up those glorious riffs. Fuller’s greatest contribution has been to draw the very best out of Jason, Tony and Marcus, resulting in a record that crackles and throbs with belligerence and bravado.

“Jason is a great friend of ours and seems to understand exactly what we are trying to achieve. We try to record like we rehearse and keep it as natural as possible so we did everything live without click tracks to make it feel more human. This time we went to Toyland studios in Melbourne to get the beds done. It has a killer drum room and the engineer there (Adam Calaitzis) is a drummer so he helped us focus on pulling great drum sounds. After the beds were complete, we moved to Goatsound Studios to get vocals and overdubs done with Fuller, and once we left, he mixed it all there. We also had Maggie Lockhart lay some amazing vocal parts and underlying keys, which added an extra element we hadn’t planned on. We also had Dav Byrne from Iridium Audio in Melbourne master it for us like last time. He gets where we’re coming from.”

In keeping with the ominous, occult vibes that oozed from 2018’s Coven’s Will, the new Witchskull album takes a similarly dark and dastardly thematic path, taking in the shadowy menace of Black Cathedrals, the overt devilry of Baphomet’s Child and nature’s slow motion revenge in the crushing March Of Winter. Defying the blank-eyed conformity of much modern heavy music, these are songs borne of curiosity and imagination, via a profound belief in the power of the story.

“Marcus and Tony are both great at coming up with unusual titles and concepts, so I leave that part of it up to them,” Joel notes. “We feel there is recurring themes and ideas in all of our three records. It’s important to us to have that as a band while still trying different things. We came up with a lot of material for the album and ended up recording 12 songs. We try not to make long albums so once everything was tracked, we picked the eight that made the album cohesive.”

Eight neck-threatening explosions from the pitch-black Sabbathian hearts of three diehard artisan riff-makers, A Driftwood Cross places Witchskull firmly at the forefront of the amorphous scene they emerged from. With burgeoning mortal threats looming over us all, the only path to salvation is through the sound of distorted guitars and tectonic rumble. Heavy music for heavy times. Suddenly, the future looks a little brighter.

“We are really happy with where we are at right now,” Joel concludes. “We would love to tour overseas and continue to work with Lee and Rise Above. Hopefully we’ll get the UK this year. My parents are both Londoners so it would be great to see the extended family as well. The US is also a priority. Our bass player Tony is a New Yorker, so we’d love to get there and see his family again and play some places even he’s never been. Other than that, we just want to tour and write another record. This is our third album so it’s time to make some noise!” 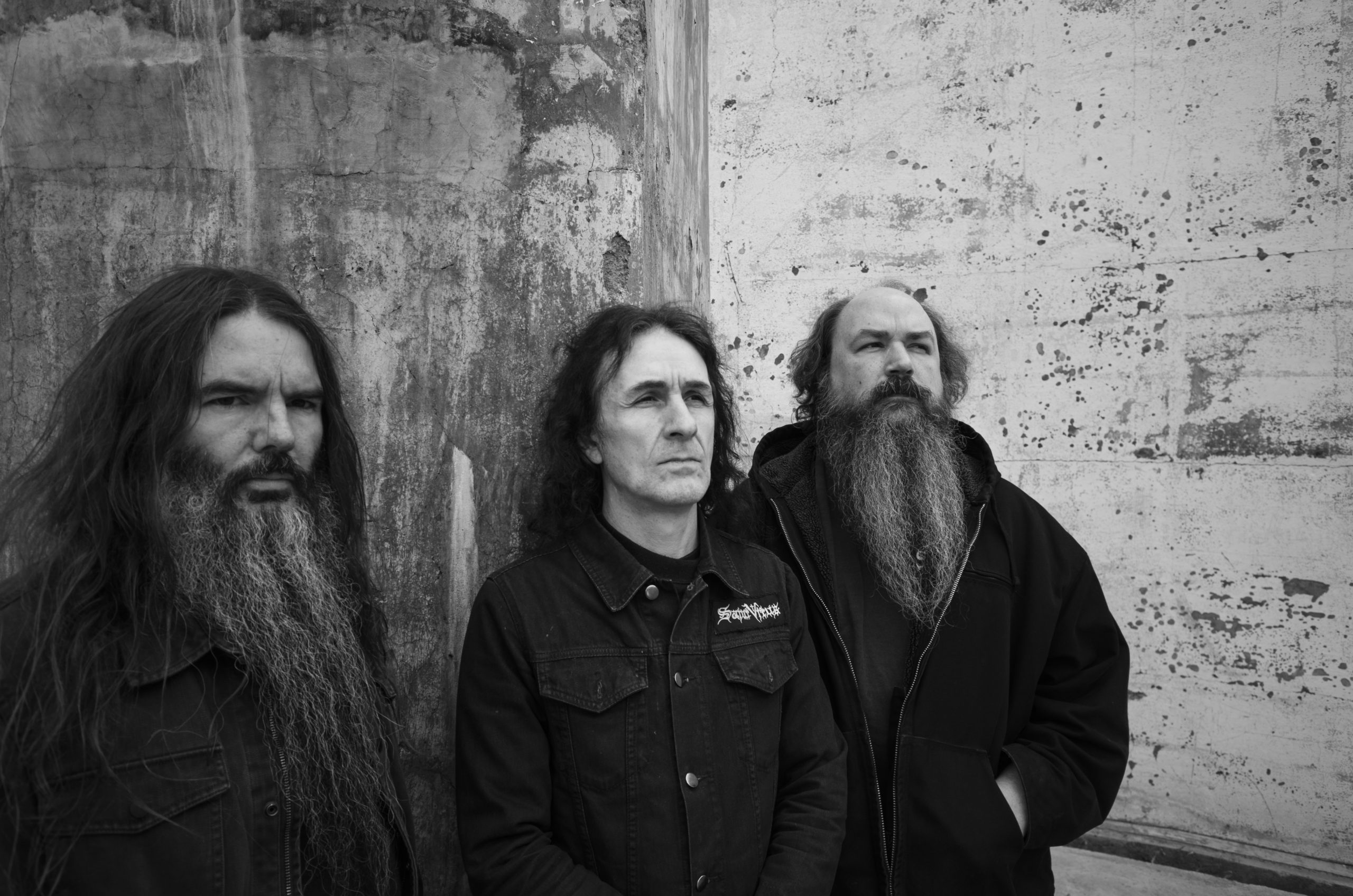