Kiss made their live debut already back in January of 1973 but it was for the debut album, released on February 8th 1974, that a first real tour had been set up. So Kiss first tour started on February 5, 1974, in Edmonton, Alberta, at the Northern Alberta Jubilee Auditorium, as an opening act.

Casablanca and Kiss promoted the album heavily throughout the spring and summer of 1974. The band (while touring) stopped in Los Angeles in August 1974 to begin recording its second album, Hotter Than Hell, which was released on October 22, 1974.

This box set features four gigs from that first tour.

It opens with a show from Washington, DC in March of 1974, quite early on the tour, then takes us through Cleveland in April and Los Angeles in July before finishing of in Toronto, Canada in September (after the recording of Hotter Than Hell but before the release of the same album). Its an enjoyable listening for anyone into the early steps of Kiss. You can hear how the band progress during these 7 months and although the three first albums wasnt the big sellers the company needed to not loosing money the band was quickly gaining a reputation for its live performances. And this box is a good proof of that.

Being in Kiss in the very first year and touring around the United States, we felt like we were taking off. It was like somebody pushing you into the deep end of the pool whether you can swim or not. The early years of Kiss were far from glamorous. We rode in a station wagon hundreds of miles every day. We would take turns driving and sleeping in the back. We ate burgers at roadside taverns. We stopped and peed on the side of long stretches of highway when we couldn’t find a town anywhere near. We ate beans and franks, because we couldn’t afford better food as we were on a $85 a week salary! Becoming a rock star was better than anything and beyond anything I ever imagined. There were moments of doubt for me that we were gonna make it. – Gene Simmons 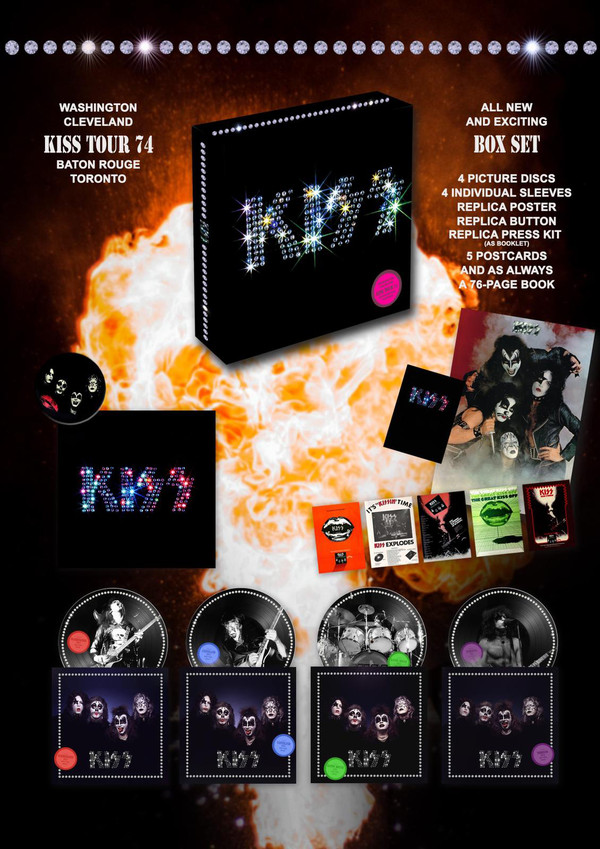