Neal Preston is one of the most prolific and highly regarded rock photographers of all time. He began working with Queen in the mid 1970s as their tour photographer. He was present on the legendary South America tour in 1981, Live Aid in 1985, and the band’s last tour with Freddie Mercury in 1986, among others. Brian May has commented, “Neal just has the knack, the skill, to always be in the right place at the right time.” This official book, produced in collaboration with the band, features over 200 images and is an exhilarating ride through their years on the road together. It is the first time Preston and Queen have collated this work in one volume: glimpses of life backstage, live performances, post-performance highs and lows, and outtakes–many of which have never been seen before–are accompanied by memories and anecdotes from Preston with forewords by Queen guitarist Brian May and drummer Roger Taylor. The pages vibrate with a palpable energy.

If you ever came across a photograph of a rock musician in a magazine spread or an album sleeve, there’s a very good chance you have seen the work of Neal Preston. For about 50 years, Preston has photographed practically every major musical act of the rock and roll era. It’s a long and esteemed list: Led Zeppelin, Michael Jackson, the Who, Stevie Nicks, Bruce Springsteen, Bob Dylan, Stevie Wonder, Marvin Gaye and U2 are just some of the legends that the American photographer has crossed paths with. In the foreword to Preston’s 2017 photo book Exhilarated and Exhausted, the writer and director Cameron Crowe wrote: “You can feel the music, the audience, the desperate need to find a place in the world, all of it in these photos because they were curated by the guy who felt it all when he pressed the button on the camera.”

One of the acts that Preston developed a close relationship with over the years is the British rock band Queen. Beginning in 1977 and continuing through 1986, Preston photographed the members of Queen — Freddie Mercury, Brian May, Roger Taylor and John Deacon — on nearly all of their tours. His images captured the band at the height of their powers, personified by the flamboyant stage theatrics of the late and beloved lead singer Mercury. Not only photographing the band in their familiar element of performing underneath their dazzling lighting rig, but Preston also candidly documented the band’s lives offstage—whether it’s them hanging out in their dressing rooms before a gig, meeting other famous people, or just goofing around. 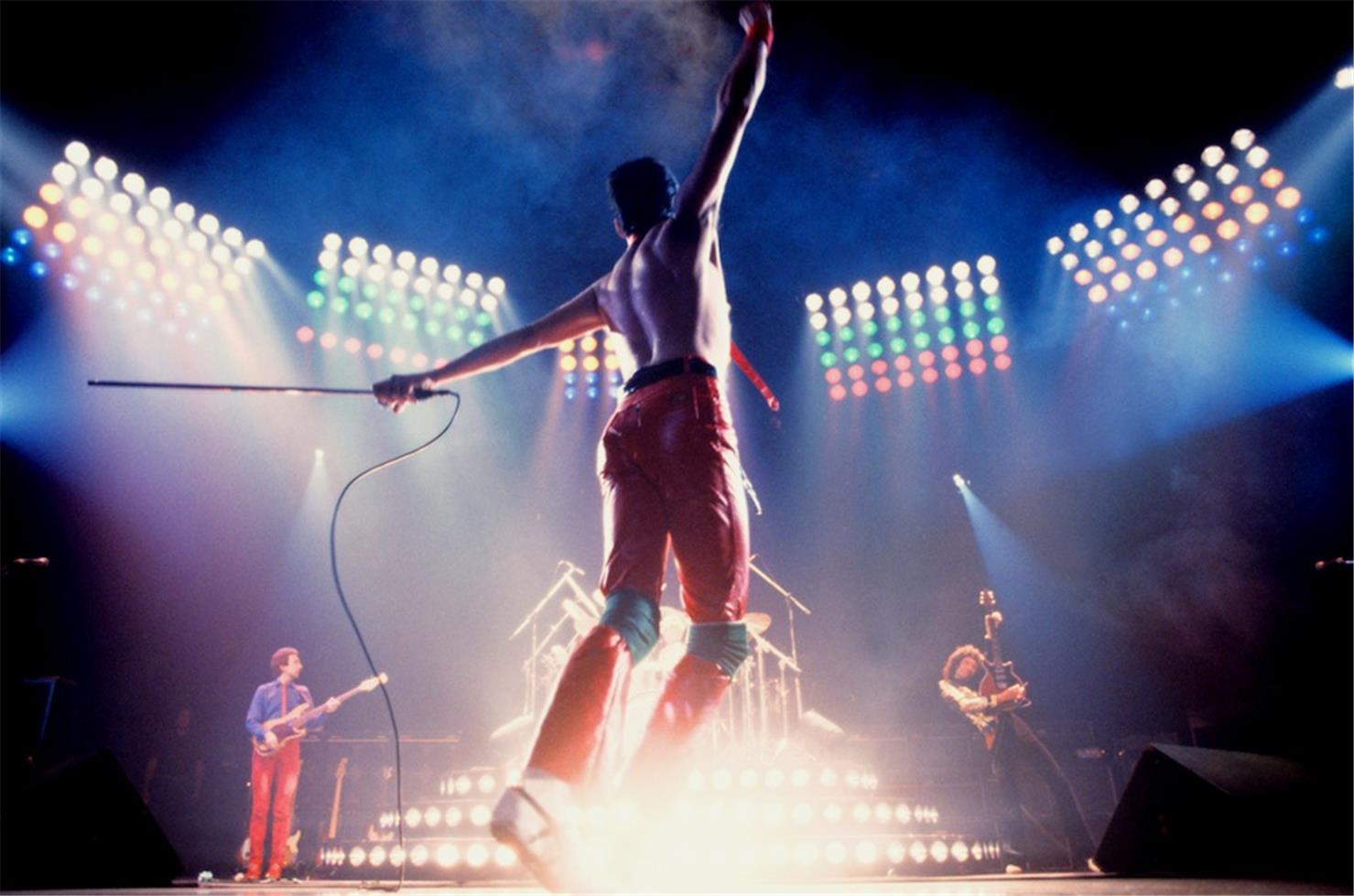 “It was just a function of all this killer stuff,” he adds, “and there’s still more that we’re sitting on that is not in the book, but that’s another movie. With Queen, there were a multitude of choices—one of those things where you’re overwhelmed with so many great photos.

How did you meet Queen?

Before I even knew them, I photographed one of their shows at the Santa Monica Civic Auditorium, I think that was in ’76. The following year, I got a call from my friend Bryn Bridenthal—who was the head of publicity at Elektra Records—asking me if I would go on the road with Queen for a while. This was after “Bohemian Rhapsody” was released. They were a big band. And I like to say that when you have the words ‘Led’ and ‘Zeppelin’ on your resume, it’s never a bad thing.

So she offered me the gig, and I went out on the road with them in ’77. They were so photogenic and receptive to being photographed. The results were really kind of magical, that we just kept on doing it: 1978; 1980; 1981 in South America; 1982; Live Aid [in 1985]; and then the next year in ‘86, the Magic Tour. It was a real kind of perfect fit between subject and the photographer.

What were your initial impressions of the band members?

Brian, Roger and I became pretty good friends after a while. I write [in the book] that Roger was the rock star guy who I immediately gravitated towards. With Brian, besides being an incredible guitar player, he was really bright. He had a passion for photography, and we just all hit it off. I also have to say the Queen crew, those were my boys. It was just like family. 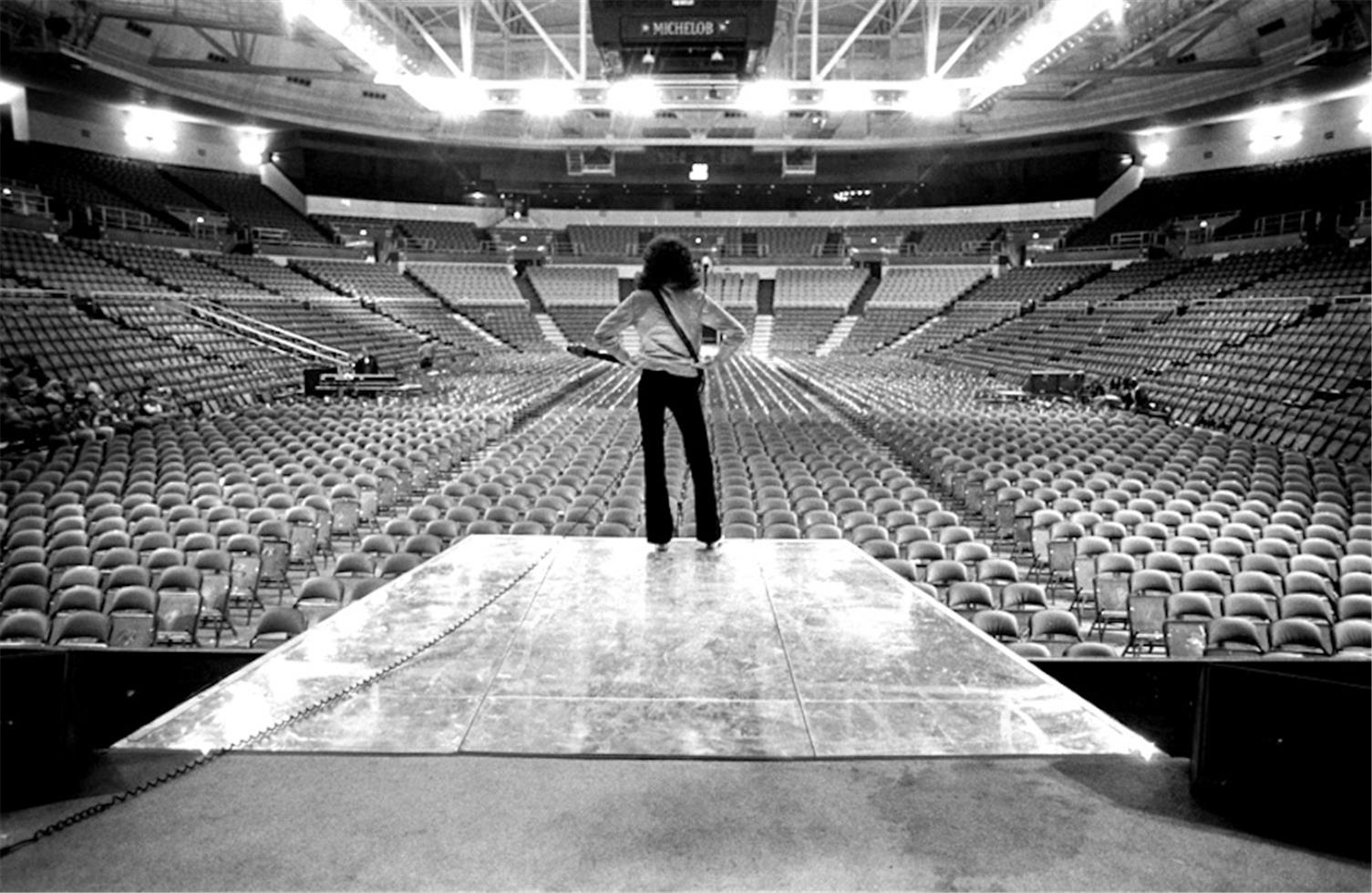 No one enjoyed being Freddie Mercury more than Freddie Mercury. I didn’t hang out a lot with him off stage because he had a different set of friends. He never said ‘no’ to me taking a photograph or working with me on a photograph. Deacon was great—again, a very, very bright guy. He is somewhat quiet, but he could let loose with a zinger that would just blow you away every once in a while.

What qualities stood out about Queen as you photographed them over the years?

They were a band in every sense of the word and every soundcheck seemed to turn into a kind of a band meeting. As I wrote, I really learned from them that “good is good and great is great, but there’s always room to do even a little bit better.” Real perfectionists in terms of lights and the sound and everything. So perfectionist. I’m lucky to have been there.

Why do you think that the band and their crew trusted you, given that photographers are sometimes considered interlopers around groups?

That’s a good question, because they did trust me. I know Brian said to me it’s not easy having a photographer on the road because you don’t want him or her to get in the way. There is a very fine line that you have to walk in order to be invisible. If you’re invisible and you come up with the goods and get the photos, then it’s the perfect storm to make the perfect photos in a good way. 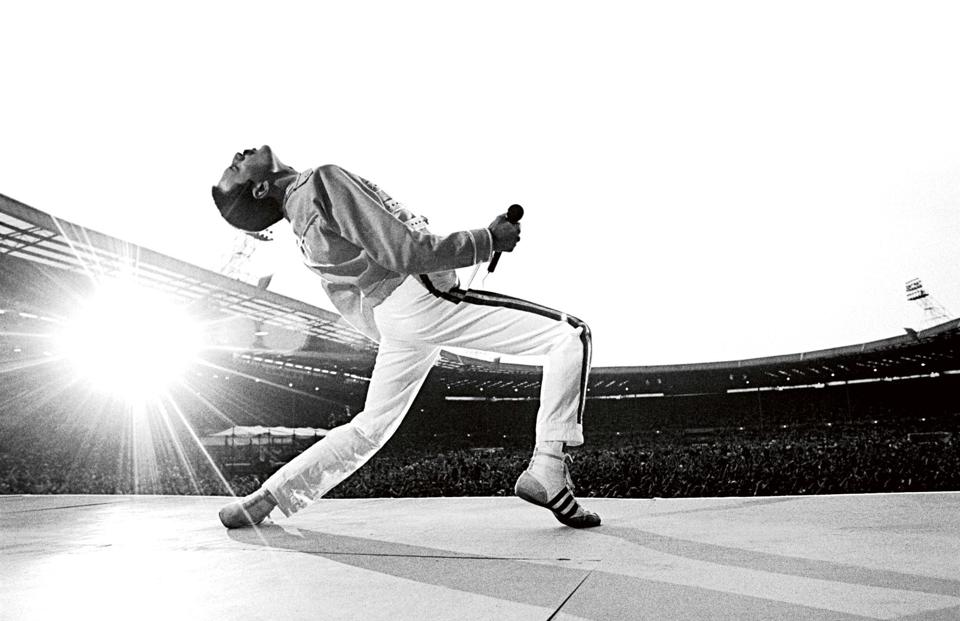 There are plenty of candid shots of the band off stage in the book, whether it’s in their dressing rooms or during a soundcheck. Others include the band hanging out with celebrities like Diego Maradona and Michael Jackson who would later record with Freddie.

I recall that there would always be celebrities that would come backstage and see the band. Honestly, I don’t recall if a lot of this would be before the show or after the show. I suspect it’s normally after the show, because most bands don’t wanna do greet people before shows, especially that band. I remember being at the [L.A.] Forum and seeing Michael and his brothers come down to see Queen. I have worked a lot with Michael when he was younger, and the brothers. So it was just another night at the Forum.”

The book concludes with photos of Queen performing in Europe in 1986 in promotion of their album A Kind of Magic. Did you have an inkling at the time of the Magic Tourthat it was going to be the last tour featuring the original lineup?

I remember flying back to the States today after Live Aid, and Rolling Stone calling me [that] the photo they wanted was of the crowd during “Radio Ga Ga.” That was my first inkling that Queen made a really big impact on the day. Then they had this big European tour the following year. I assumed after the European leg was over that they would come back to the States. Honestly, I don’t know what went into the decision that they made as far as touring at that point, other than Fred’s health became an issue.

Fast forward to the present, and you’re still photographing Queen this time with Adam Lambert. How has that experience been like?

Being around them always feels like home. It’s a whole different crew—not that the crew is not great for that, but it’s a different set of people. It’s a different kind of show. Adam is really fantastic, and he doesn’t try to be Fred. That’s not a battle you’re going to win anyway. But he doesn’t have to. He’s Adam and he’s fantastic, he’s a different guy. And it’s still Queen songs. Look, then is then and now is now. Queen carries on with Adam.

Of all the legendary artists you’ve worked with, how does Queen rank up there for you?

When I worked for Led Zeppelin, I was 21. That was an experience. Working for the Who was a different experience. I think working for Queen was more of a familial experience. In terms of the job I would do for them and how many times I did it and how things meshed together—it really felt more familial with them than it did with any other band, except for maybe Heart because I know Ann and Nancy [Wilson] so well. But that would be the difference.

Everyone thinks being on a rock tour is the greatest thing ever, and that I have this greatest job. The reality of it is it’s very stressful: you don’t get much sleep for various reasons, deadlines are sacrosanct, you have to deliver the goods, and you’re not the fifth member of the band. There’s a lot of stuff that went into making all those photographs, stuff that you don’t see. I don’t know how I did it. I really do believe that the work I did with Queen is probably the best work that I ever did.