In front of a receptive gathering, Grant played his entire debut EP live whilst also generating interest from many passer bys who were enthralled with Burns’ guitar hystrionics.

Grant was available to sign copies of his single which was released earlier in the week through Rue Morgue Records.

“We’re gonna be doing many more of these with our friends at Alt.Cvlt with future Rue Morgue Records artists…” said label head John Raptis.

“We’ve got a wonderful relationship with the team from Alt.Cvlt and it was very special to see what a beer at the Reverance Hotel with Grant and I back in February all eventuated to. We shook hands and set about to create a wonderful record and experience and that makes all the hard work in-between all worthwhile. It is not easy going from start to finish on a project like this but with the fantastic work ethic of the Morgue team, we accomplished all we set out to do…” continues Raptis.

You will be able to purchase copies of the Chaos In Design single at Alt.Cvlt, Rue Morgue Records and when Grant goes back on tour with leading Melbourne Thrashers Mason.

Thank you to all who came along! 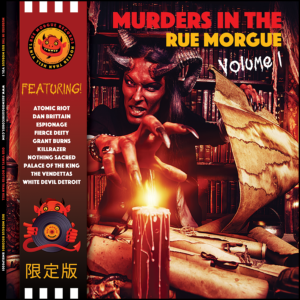 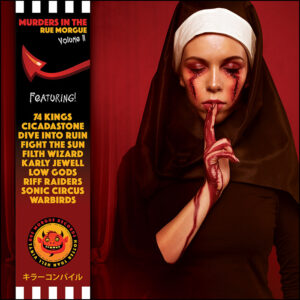 Who remembers these classic compilation records of

Hotter Than Bernie #bernie - one of mine! Share aw

Our collection of unique and cool soundtracks grow

I mentioned earlier this year that Rue Morgue Reco

Very saddened to hear of the passing of New York D

New RMR label tshirt! Everyone loves our shirts so

The MEGA Kreator box-set is now available for pre-

You know we’ve got our own YouTube channel! Hit

Good fuckin riddance! I remember the shock and hor

The only list that matters! ;) The Rue Morgue Reco

Rue Morgue Records is absolutely delighted to be t